Nette Scurr was in search of peace.

After being diagnosed with grade three breast cancer in 2015, Scurr wanted clarity before she underwent her mastectomy surgery.

Scurr, who lives in Waiuku with her partner Tess Moeke Maxwell, is a nurse who has been part of breast cancer research projects and has also worked in palliative care. 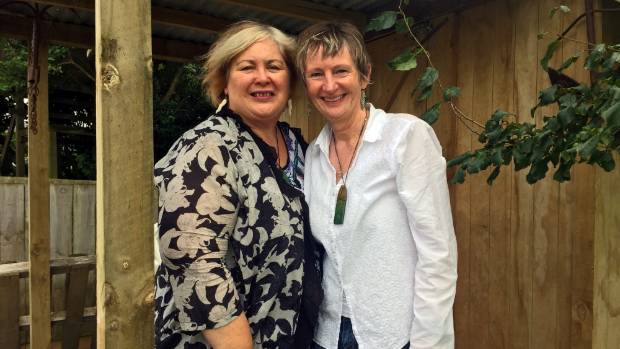 Despite fearing she had breast cancer, Scurr waited a long time before going for a mammogram.

After she was diagnosed, Scurr started to meditate with Moeke Maxwell to help ease her anxiety.

“She found her mind calmed down by doing the simple meditations and daily affirmations,” Moeke Maxwell said.

On a sunny afternoon, while drinking coffee in a central Auckland cafe and reading their meditation book, Scurr said something that struck Moeke Maxwell.

“I looked over at her and she said Tess I’m the happiest I’ve ever been.”

Moeke Maxwell said Scurr wanted to share her story about how meditation helped to calm her mind and the idea to write Stars of Aroha was born.

The book was released last year, and the full version of the app launched this month.

Every meditation in Stars of Aroha is based around the New Zealand environment and includes Maori mythology stories, meditation readings and original music.

Moeke Maxwell has a background in psychology and women and gender studies and said she was raised with a strong sense of spirituality.

“We were big believers in wairua and the continuation of life – for me that’s just a natural part of who I am as a Maori woman.”

Stars of Aroha, Moeke Maxwell said could help a range of people – from those suffering with illness, mental health issues or people with anxiety.

“Ordinary people who are just struggling with the everyday challenges that life brings – problems with relationships, problems with kids, financial stresses, stress with jobs.”

She turned to kaumatua for advice on the book and said she mixed her personal views as a Maori woman with a contemporary sense of spirituality and meditation discourse.

“I felt it was a taonga and I needed to nurture it.

“I’m not a tohunga, I’m not a kaumatua or anything like that but I listen to my tupuna and they guide me.”

In October last year, the couple’s phone started to ring off the hook when Moana Te Oriwa Papa shared her story with The Listener about how the book had helped her cope with meta static breast cancer.

Te Oriwa Papa died last month, and the couple never got to meet her.

“To write a little book and to help a beautiful woman like that.”

Moeke Maxwell said she hoped the book could help others along their journey.

“We’re new at this so I think we’re trying to present something in a very simple way.

“Trying to help people that are unfamiliar with trying to calm their mind.”