MTV’s The Challenge: Invasion of the Champions brought the usual drunken fights, hookups, alliance drama and backstabbing that we have come to expect from The Challenge franchise. While these aspects were present throughout, they were not the focus of this season. Ironically enough, the theme that ran through this alcohol fueled cutthroat competition was personal growth. While it was apparent that the show orchestrated this somewhat (since when does TJ ask competitors what this win will mean to them? I thought I was watching Chopped for a second!) even the best producers couldn’t manufacture the growth and maturity shown in three of our returning favorites: Tony, Laurel, and CT.

It is crazy to think that I have been watching The Challenge (and it’s RW/RR predecessor) for the past 15 years, starting back when they were traveling in Winnebagos. I have so many vivid memories of watching this show. Remember in Real World/ Road Rules 2000 when Amaya refused to eat a pig hoof because she was “kosher” (which she wasn’t)? Or, one of my favorite/ most epic moments of The Challenge, when Ruthie stopped herself on the inch long piece of rope to win the challenge during Battle of The Sexes: I. Actually, everything Ruthie did that season was BAMF. (I am going to stop myself now because this could go on all day).

As I have gotten older I have found aspects of the show difficult to watch. This franchise can be sexist and misogynistic, and has been accused of turning a blind eye to sexual assault. So, it was refreshing and heartwarming to watch competitors who had once been combative, ruthless, and downright cruel to others find an inner calm this season.

Writing about and analyzing a cast member of a reality show is more difficult and complex than analyzing a fictional character. Reality TV is a carefully curated collage of clips that producers mold into a desired storyline. There is very little trust between the viewer (at least this viewer) and the producers that the show believes context is necessary. That is why I felt a little uneasy writing this because I am analyzing a manufactured and edited version of a real life person.

But nonetheless, I am doing it. 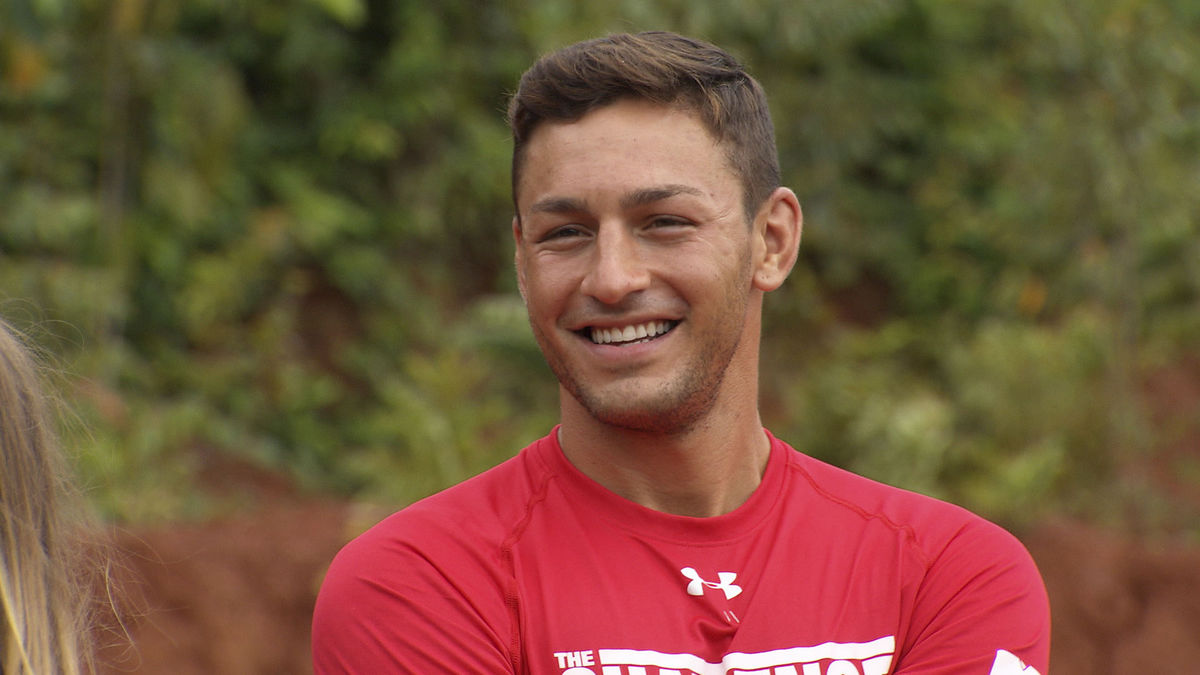 TJ summed it up perfectly when he said goodbye to Tony:

TJ: “I don’t know what you did with the old Tony, but I really like the new one.”

Tony, originally from RW: Skeletons (2014) first came to The Challenge in Battle of the Bloodlines with his younger brother Shane. In all honestly, I haven’t watched The Real World since San Diego 2.0 in 2011, so I didn’t know much about this dude before Bloodlines. From the get go, Tony did nothing to make me like him. He got in a screaming match with Shane and shoved him into a wall before TJ could even announce the first challenge. For some reason they allowed him to stay. His hot head antics landed him in Rivals III with Camilla as his partner. Lo and behold, Tony gets into a drunken fight with his partner during this season as well, but this time it sends him home. (although bizarrely the actual altercation wasn’t filmed leaving some to be skeptical of what really happened).

This season for Invasion of the Champions Tony arrived a new man with one daughter at home and one on the way. He was confident, strong, caring, and sober. The likelihood of Tony reading this article is low, but I just want to say this: Tony, I have so much respect for your willpower to stay completely sober during the challenge.

If you watch behind the scenes clip from any Challenge or any of the reunions, you know how monotonous and boring living in the challenge house can be. They are cooped in a house (albeit a fucking GORGEOUS one) with a bunch of competitive type-A personalities. There is no internet, there is no TV, and also there are copious amounts of alcohol floating around at all times. Usually the only non-challenge reasons competitors leave the house is to go alcohol filled clubs. The fact that Tony, a dude who has spent the last 15 years partying, had the resolve and willpower to resist temptation given those conditions is awe inspiring.

Becoming a father has changed Tony for the better, and he now realizes that his actions don’t only impact himself, but his family as well. Tony’s resolve to stay sober isn’t just due to external forces though, he doesn’t want to go back to who he was when he was drunk and out of control. He likes this sober version of himself and one night as he watches Nelson throw a drunken shit fit over being rejected by a girl, Tony turns to Corey and says “that used to be me” and expresses how he never wants to go back to being that person. 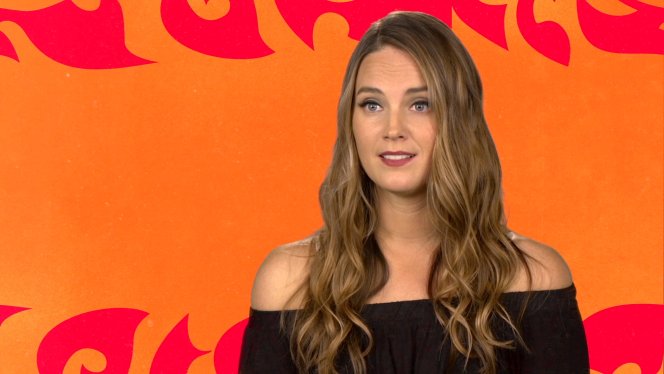 Laurel has always been one of my favorite competitors. I love how fierce, loyal, and competitive she is, but sometimes that competitiveness turns ugly. Laurel’s Challenge debut was Fresh Meat II where she and her partner Kenny dominated the season. While the pair ultimately came in second place, she and Kenny won FIVE challenges throughout the season. Laurel was pretty tame in her debut season. She sometimes got pushy and aggressive when drunk, but her biggest beef in the house was the other girls didn’t like her because she was fucking dominating.

It wasn’t until her second challenge, Cutthroat, that a cruel side of Laurel was shown (which was usually fueled by alcohol). Laurel got in three drunken shouting matches in the first three episodes of that season (FYI, there are only 10 episodes). Those fights were nothing though compared to Laurel’s drunken and cruel diatribe against Big Easy. A drunken Laurel (potentially unprompted) rips into Eric saying how he is disgusting, ugly, and fat, and that no one in their right mind would ever touch him. It is really hard to watch, and truthfully sickening, to watch someone spew such hateful and personal attacks towards anyone, let alone Eric. In my opinion, this was the lowest Laurel has ever sunk on The Challenge.

Laurel’s change in demeanor was noticeable immediately on Invasion of the Champions. I first noticed it through her interactions with Jenna regarding Zach. When discussing Zach and Jenna’s relationship during an interview she lists all of the bad things Zach did to Jenna and ends with “And all she did was love him.” This is a soft, kind, and tender side to Laurel that until this point had not been shown on The Challenge.

Laurel’s personal growth is displayed most clearly through her budding feelings and relationship with Nicole. And this is not just me clinging onto any lesbian content on TV (which I have been guilty of). Camila said it best when she states:

“I would have never guessed– knowing Laurel– that she would be this way with… anyone.”

Laurel doesn’t talk about her feelings. She gets angry or retreats, that is how she has always dealt with her emotions. So, when she tells Camila that she “almost wants to push myself to talk about” her feelings for Nicole, that was a big deal.

Laurel did not fly off the handle once this season, even when Amanda was just ASKING for a beating. When she felt that Nicole was playing games with her, she sat her down and the two discussed their feelings. And, in the end, the pair got together and started calling each other babe within days of dating, like any good lesbian couple should.

It should also be noted that The Challenges depiction of this budding relationship is in stark contrast to how they usually depict two women together, which usually includes guys egging them on, ogling and gossip. There might have been gossip, and I bet there was, but it wasn’t the focal point of the storyline. 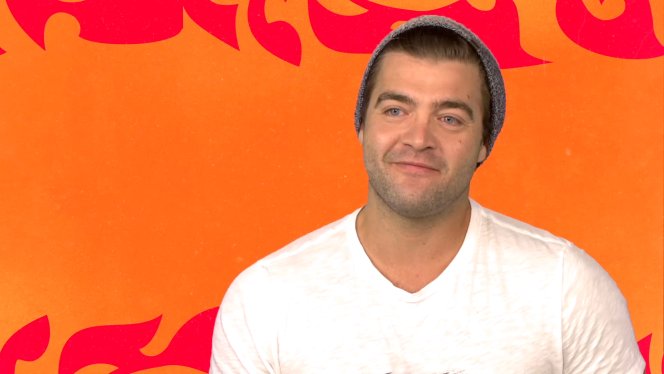 The man, the myth, the legend, the beast: CT. I have always had a soft spot for CT, all I wanted was to understand him! Up until this season, CT was pretty unknowable. While he had his soft moments (often only when Diem was around), he had many many more, well, not soft moments.

CT was kicked off of not one, but TWO Challenges before the first challenge even occurred. In The Inferno 3 he punched Davis in the eye (off camera) and was sent home the first night. The most infamous of his fights though occurred on The Duel 2 when the entire house was unable to hold CT back from legit hulking out on Adam.

Like Tony, CT is now a father and his adorable little nugget of a son Chris Jr. is the joy of his life. CT’s face light up when he talks about his son. He is a changed man. His actions no longer just affect himself, they affect his son. More than that though, CT is just calmer this season. He doesn’t incite any fights or fuck with people for the fun of it. He was there to compete and win money for his family, period.

The last time that CT competed on The Challenge was on Battle of the Exes 2 where he had to leave early due to Diem’s declining health. As I said earlier, CT was at his kindest when Diem was around, and as soon as Diem wasn’t feeling he left to be by her side without a second thought. Shortly after leaving Exes 2 Diem passed away after nearly a decade-long fight against cancer. This rocked CT to his core and changed him.

During filming, the final six competitors were in Thailand for Loy Krathong (the Festival of Lights) a festival about “cleansing and renewal;” a time for people to reflect on their past and previous misdeeds, and envision their goals for the future by releasing floating lanterns onto the water. That year, in 2016, Loy Krathong fell on November 14th, the anniversary of Diem’s death. As would be expected, this was an exceptionally emotional experience for CT, but instead of lashing out and burying his feelings he embraced the ceremony and saw it as a sign that it is okay to move on. And then, he opened up and told his story. He verbalized on national television the pain and sadness that engulfed him after losing Diem. He expressed the joy that his son has brought him, and how being a father has helped him heal. And then he ends it with this

CT: “I’ve been trying to get better and get better to finally let go of the past, and to look forward to my future with my family and my son. And I’m looking forward to being happy again.”

This season on The Challenge: Invasion of the Champions the explosive fights that usually precede The Finals were replaced with an emotional and meaningful ceremony for the six final competitors. The show put a spotlight on each finalist’s journey to get to this point in life: all of their struggles, all of their demons, all of their accomplishments. MTV highlighted these aspects in a positive light instead of exploiting it for more drama and tension. And I guess in a way, maybe that demonstrates that the franchise itself might be maturing as well.