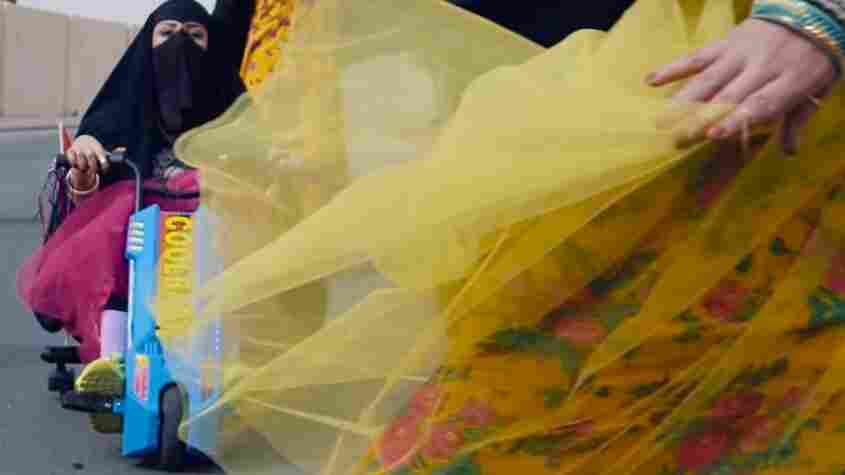 The music video “Hwages” has become a viral sensation in the Middle East. YouTube hide caption

The music video “Hwages” has become a viral sensation in the Middle East.

There’s a music video that’s been racking up millions of views for the last few weeks — and it comes from Saudi Arabia. NPR Music’s Anastasia Tsioulcas describes the scene:

“There’s this amazing setup. You see women wearing full niqab — so they’ve got their faces covered, their hair covered, clad in black, it seems. And then they burst out in super-colorful outfits and doing all kinds of silly things, playing basketball and riding bumper cars,” she says.

In a conversation on All Things Considered, Tsioulcas tells Ari Shapiro how the visual, inspired by a lesser-known, low-budget clip from 2014, has become a viral sensation. Hear their conversation at the audio link, and read an edited version below.

Ari Shapiro: I don’t speak Arabic, but I know a good tune when I hear one. What do the lyrics say?

Anastasia Tsioulcas: So, that’s where the real interest in this video is. The name of the song is “Hwages,” which means something like “concerns” or “obsessions.” And the lyrics are pretty subversive. They start out, “May men disappear, they give us psychological illnesses / None of them are sane, each one has an illness.

Basically saying, by definition, “Men are mentally ill.” A bunch of Saudi women singing this.

And what’s amazing is how much this as really taken off across the Middle East: It’s become hugely, hugely, popular. Who are the people behind this?

We don’t know who the women are, but the video director is named Majed Alesa. He has become this viral video machine in Saudi. He now has this platform and he can amplify his message to his millions and millions of followers.

So, at one point in the video, there’s a cut-out of Donald Trump that rises on a proscenium behind a stand that says half in Arabic and half in English, “The House of Men.”

Has there been much pushback to it?

You know, it’s funny — I haven’t seen a lot of official pushback. You see YouTube comments in both English and Arabic saying, “This is not a women’s movement, don’t judge on this, our values are still really important to us.” But you also see a lot of very positive feedback.