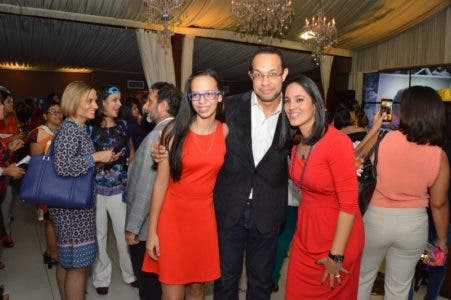 Santo Domingo.-With its cool outline educational, motivating, inspiring, and bringing joy to the listeners, the radio show Road to the Sun has arrived at its fifth anniversary.

Led by Reynaldo Infante, Zobeida Ramirez and Cinthia Ortiz, Journey to the Sun celebrated this birthday with an entertaining encounter in the restaurant Taboo Bamboo, which brought together friends, co-workers and “caminoalsoloyentes”, as they call the faithful followers of the program.

“Since we started the program we had a defined line, a public that would like to have a different option in the morning and that will add value to their time and their days”, put forward Cinthia Ortiz.

On your side, Zobeida Ramirez added that within the sections of the program is the news and even they will be looking for a positive approach, “we go a little bit beyond the information, we share possible solutions and causes, we do not stay in the critical”.

“Our target was the young audience-adult, but we’re surprised when occasionally, until the children call out to us,” said Reynaldo Infante, who also pointed out that “the program has had a host such that the public that listens to us he feels part of it.”

The veteran announcer was narrated that “this project started with about five staff, but with the years it has evolved and grown and now there are more than 25 contributors who bring their knowledge. We have specialists in diverse areas such as family, leadership, education, digital marketing, philosophy for life and executive coaching, and staff.”

At the anniversary party, and as part of the program of activities, the guests participated in several contests with those who received prizes courtesy of “Shop World online shopping store.

Road to the Sun is transmitted of Monday through Friday from 7:00 to 9:00 in the morning by Station 97.7 FM Group Listin Diario.

Communicator dominican republic with more than 20 years of experience in the media, Radio and Television.

Since the year 2002, and to date, is the CEO and Founding partner of World Voices, SRL, a producer of audio in multiple languages, with headquarters in Santo Domingo. In addition, it is the general producer and principal driver of the radio program morning Way to the Sun, which is disseminated every day through the Station, 97.7 fm, the Group Listin Diario.

Is a teacher of voice talents in Spanish, coach speech executive, and frequently a guest speaker at panels and events related to the Voice over and the English Neutral, within and outside the country.

Reggie is a graduate of Universidad APEC, Bachelor of Business Administration in the year 1997, and subsequently performed a Post-graduate Degree in Public Relations at the Catholic University of Santo Domingo in 1999. Account in addition with training in Nlp.

As a talent, is the voice commercial in Spanish for major brands worldwide such as Maersk, Hyundai, Museum Winbledom, Lincoln Center NY, Nokia, Intel, Harley Davidson, Central Bank of the Dominican Republic, among others. You can learn more in www.reynaldoinfante.com or through other networks: @reynaldo_infante and @worldvoices_

Co – host of the program since its inception, and announcer commercial from 2006. His professional experience spans the areas of Operations and Human resource Management. Since the year 2002, and to date, it is also a Founding Member of World Voices, SRL where he also serves as director of Casting and Projects.

Cinthia is a graduate of Universidad APEC as a Bachelor of Business Administration in the year 1997, with subsequent Post-graduate Degree in High Business Management and Master in Management and Productivity.

As a talent, has been the voice business for several years of the magazines, Vanidades, and Cosmopolitan to the united States, as well as international brands such as Kohls, Home Depot, Nucleus Labs, American Express, Arcos Dorados, among others. So also used as a voice for Apps and stories for children in Spanish neutral, audiobooks and audioguides. You can learn more in www.cinthiaortiz.com or through other networks: @cinthiaortizacosta and @worldvoices_

Involved in radio since the early 90’s, he has participated as a producer and host of programs such as Audiojazz in the 104.5 fm, Another Note of Jazz in the 93.7 fm. In the late 90’s comes to The Different Note as the driver of the program The Express 95.

In the year 2001, together with Reynaldo Infante and Cinthia Ortiz, the program starts the Way to the Sun. She is currently the Director of Radio INTEC radio, university of the Technological Institute of Santo Domingo.