Mathieu Ricard, the son of the philosopher Jean-François Revel, had a formal education. After obtaining a phd in molecular biology no less than in the Pasteur Institute, of Paris, he abandoned his scientific career to concentrate on buddhism. Today, Ricard, who lived in a tibetan monastery, is considered to be a buddhist monk and a neurobiologist, and is dedicated to explore how meditation alters neural circuits. It is not the only one. Universities of the central countries are developing programmes of research, primarily on its psychotherapeutic applications.

In an experiment highly publicized, Ricard himself underwent a magnetic resonance imaging at the University of Wisconsin to measure the activity in your left prefrontal cortex (associated with positive emotions). The images reflected the levels of activity higher than would have been.

That study became one of the scientific references most consulted. However there are those who warn that we must not encourage excessive enthusiasm about these excursions, which are placed in a terrain that is naturally slippery. 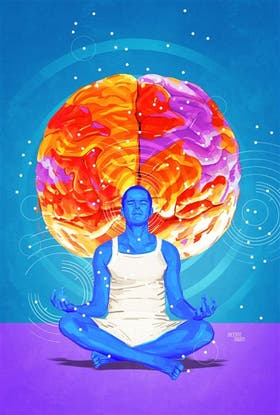 More notes to understand this topic

An approach that is far from the esoterismos

“The number one problem is that it sometimes tends to confuse the ideology of this eastern philosophy with the scientific fact and then start to be more ideology than science,” stresses Paul Richly, director of the Center for Brain Health.

Others, such as Fernando Pitossi, researcher of the Conicet at the Instituto Leloir and a specialist in stem cells, which for nearly three decades practicing meditation, consider the benefits of certain techniques of buddhism does not leave place to doubts. “There is a resurgence of clear and convincing of the dialogue between science and contemplative practices to ancient, such as meditation,” he says. Is in a time of great vitality. Have a lot to offer for the health, quality of life and the understanding of this that we call reality.”

According to the scientist, it involves an interaction with benefits for both disciplines, provided that the expiration of the pruritus scientist entering a field of research where “it would seem that there is nothing measurable, although more than 4000 scientific publications in international journals refute this argument,” he stresses.

The first work with “scientific format” on the effects of meditation found in PubMed dating from the post-war period and discusses the effects of meditation on the nervous system, he explains. “But almost half [2094 on a total of 4449] were published in these last five years -outstanding. Without a doubt, the evidence indicates that at present this is a topic of high scientific interest.”

Among those who opened the door to the look buddhist is the licensed Martín Reynoso, who took courses at the Center For Mindfulness, Boston, and New York, and today directs the program of this technique in the Institute of Neurology, Cognitive (Ineco), which were already hundreds of people.

“The mindfulness [something like “mindfulness or mind full”] is known since more than 2500 years ago, when the practice of meditation taught by the Buddha -explained Reynoso-. It is clear that in that context, I had certain connotations that do not have at present. In 1979, dr. Jon Kabat Zinn, also a molecular biologist, but of the University of Massachusetts, decided to apply it to people that I saw in your hospital. He began to see that, in patients with chronic conditions, could lessen the burden everyday that produces the disease.”

According to Reynoso, the changes did not occur in the clinical picture (although some studies in psoriasis suggest that those who practiced mindfulness while receiving phototherapy had a better recovery), but improved the quality of life, “which is no small thing.”

The protocol known as mindfulness day stress reduction (MDSR) consists of eight meetings, then the person has to supplement with daily practices at home. “Each session has a theme -detailed Reynoso-. We conducted exercises of relaxation, concentration, yoga and conscious meditation-formal, which is what we know as the “sitting meditation”. It seeks, first, to achieve a certain state of concentration, the mind is not continually thinking about. And in a second, mindfulness, which is the opening to all the phenomena which surround us. Both external (sounds, smells) and internal (body sensations, and thoughts). Usually the person does not recognize is that you are constantly reacting to these phenomena with the annoyance, inconvenience, discomfort, uncertainty… When it begins to be conscious, is gaining greater control in their life.”

Although observed empirically its benefits, Reynoso and the research team of Ineco are trying to “clear the chaff from the wheat”; that is to say, they are applying the scientific method to the study of mindfulness. Some papers reported negative results.

“For example, we wanted to see if those who practice have a greater capacity to feel their body, in particular your heart [a faculty in the neurosciences is known as “interoception”] -account-. But we do not gave a significant difference. Now we’re doing two investigations. In a we also want to establish what changes occur in the stress, the anxiety, the mode of coping with the problems, session by session. In another, a group from the University Favaloro, we are exploring what changes does this practice on the health care professionals.”

For Richly, are fairly clear, certain benefits in the management of stress and chronic pain. “Serves -stresses-; I, in fact, I would suggest this to some frames; the problem is the extrapolation. When using the label “buddhist” to any thing and you are awarded benefits that are not such. It is known that the large effect of psychotherapy has to do with factors that are non-specific, as the link between the therapist and the patient. So it is difficult to prove which is better. And, on the other hand, compared to what: do with psychoanalysis, cognitive behavioral therapy…? Research designs in psychotherapy are very complex and that is why this discipline is in the midst of a great crisis of replicability. That a lot of people run something doesn’t mean that something works. On the mindfulness there is evidence, the rest is a field of discussion,” he concludes.