One day the Buddha lifted up a flower white as he was teaching dharma to an assembly of thousands of monks. Shakyamuni (as would be known among the practitioners of the mahayana) showed the flower, and kept quiet. We can only imagine the depth and intensity of that silence. It was this silence that has inspired the popular phrase: silence is golden. That silence, that reveals to us that eternity is present in the moment. The silence and the flower were the totality of the teaching of the Buddha, but the sermon is not complete until one of his most accomplished disciples, Mahakashyapa, smiled subtly to the gesture of the Buddha. That was the beginning of zen: in the silence of the Buddha, in the flower (that is the smile of silence) and the smile (that is the flower of understanding) of Mahakashyapa lies the totality of the doctrine, the enlightenment of all the buddhas, always available in the silence of meditation that defines zen.

We could conclude here this trial and perhaps it would be best to do so, letting the silence and the mystery of the gesture to convey the ineffable. But more of a lesson of dharma, for which there are certainly better vehicles than this, we are interested in here, remember a story, make an introduction to the foundation of zen, and that since each person can then put into practice this if you feel some inspiration. So then, we can explore and contextualize the silence of the Buddha and the flower of the enlightenment.

The episode recorded is known as the Sermon of the Flower, in chinese literally called Niān huá wéi xiào: “pick up flower, subtle smile”. It is not part of the sutras of the Pali Canon or the mahayana, but that was part of the oral tradition of zen or chan; its first written record dates back to the year 1036 in China. Mahakashyapa is one of the disciples of the most famous of the Buddha, and appears in many sutras; he is known for his great ascetic discipline. Its name, which means in sanskrit “great turtle”, has a lineage that is difficult to surpass: Kashyapa was the oldest of the seven rishis or sages who discovered the hymns of the Vedas at the beginning of time, and Kashyapa is also the name of the Buddha prior to Gautama Buddha according to the Canon Pail. The chinese, however, made a more poetic translation that interprets the sanskrit root “kas” as “shine” and “pa” as “drinking”; as well Mahakashyapa for the zen will be the “Great Drinker of Light”. This is in keeping also with a story that has born a golden light filled his room and entered his mind. That light is the light of the transmission of prajna. Mahakashyapa is the one who drinks the light of the Buddha, the light of the silence, which is the direct transmission of an understanding beyond time. The light that cannot be transmitted to us through the scriptures, can only be experienced in silence. The silence is the supreme method of knowledge, that which cannot be known in words and that transcends all relation subject-object, the gnosis of non-dual that is the essence of the state buddha.

In one of the classic texts of zen,the Denkoroku (record of the transmission of the light), master Keizan tells:

Before an assembly of 80 thousand monks on Mount Grdhrakuta [Monte Vulture], the Buddha held up a flower in your hand and blink your eye. No one in the assembly understood what I was doing, and remained silent. Mahakashyapa smiled… The Buddha held up a flower and showed that it was not changing. Mahakashyapa smiled to show that it was eternal. In this way, Sakyamuni and Mahakashyapa they met and their pulses mingled. The perfect understanding and pure does not involve the mind that discriminates, so Mahakashyapa sat in meditation and cut off the root of the thought.

Tradition has it that the Buddha said at that time: “I have the Treasury of the Eye of the True Dharma and the wondrous mind of Nirvana, and I transmit it to Mahakashyapa”. Mahakashyapa would be the great patriarch of the zen and all the great zen masters would live this ultimate experience, getting the Eye of the True Dharma, the direct transmission of the enlightened state. Shōbōgenzō: The Treasure of the Eye of the True Dharma would be the title of the works of Dogen, the greatest master of japanese zen. In a certain way the trail would not be more than the resonance present of this unique act: the silence, the flower, the smile… Silence because the truth cannot be said; the flower because when it comes to understanding everything that is perceived as the expression is always pure truth, which does not change; smile because joy is the natural state when you understand that everything is perfect, everything always has been lit, and how unnecessary it is to strive. 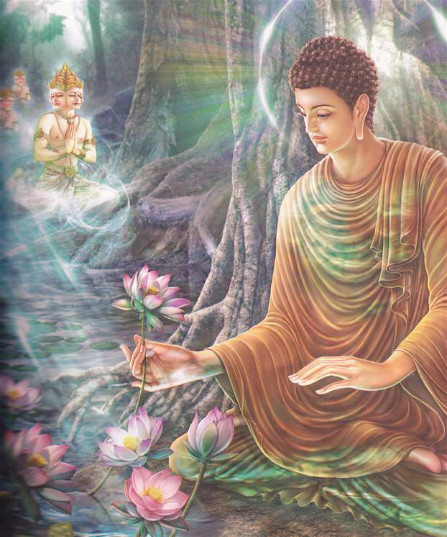 In the quoted text from Keizan describes the episode of Buddha’s enlightenment as the prototype or instant weekly that is updated by each of the members of the lineage:

This is what we want to say, using language, sometimes enigmatic zen that seeks to destroy the logic of dualistic with rays of clarity and non-conceptual, is that all beings have the essence of buddha, the time really does not exist and therefore the moment of Buddha’s enlightenment is the most intimate, present reality, of which we are only separated by constructs mental dualists. The eye of the Buddha that contains everything is the eye whose essential feature is the vision of non-dual, the eye that sees everything as buddha, all lit up. Shakyamuni turns looking at Venus, but not as a star that is out there, but as the light being to itself without distance or difference. Pure vision. Pure lighting. Or, as a master of contemporary vajrayana buddhism, all that is heard is the sound of the light passing through itself. This is the only transmission, the world and all the bodies: the whisper that causes the light to pass through itself.

As well account Dogen, the great patriarch of the current Soto in Japan, this seminal episode which everything else is just an echo:

The authenticity of the transmission of the buddha-dharma remains hidden throughout the time. Long ago in the assembly on the Vulture Peak the Tathagata [the Buddha, the one who resides in the real] entrusted to Mahakashyapa the unsurpassable teaching, the treasure of the true dharma eye, the inconceivable mind of nirvana. This event was witnessed by devas, who live still today in the world of heaven; you must not doubt.

Dogen, who also received this direct transmission in your memorable trip to China, the emphasis is on face-to-face:

In this way, day and night, the venerable Mahkashyapa attended carefully to Shakyamuni, and spent his whole life being intimately illuminated by the face of the Buddha. For how long has it been happening this is beyond comprehension. You think joyful and quietly on this.

Dogen points out that this transmission is like “pouring water in the ocean and to do that it spreads infinitely, or how to turn on a lamp and let it shine forever”. The direct transmission is occurring at this very moment: “Exactly at this time the buddhas, ancestors are closely passing each other… spread from vineyard to vineyard, without being cut off. It is transmitted from eye to eye, with the eye open. Is transmitted face-to-face, with the face revealed.”

Keizan passed, in his Chronicles of the transmission of the light, the same idea of resonance present experience of enlightenment:

If practices urgently the Trail today, Mahakashyapa has not yet entered into the Monte Kukkutapada and may appear in Japan, the body of the flesh of Shakyamuni is still warm and the smile of Mahakashyapa will be new again. If you can reach that place, you will be the successor of Mahakashyapa, and Mahakashyapa will receive the true dharma of you… Without beginning or end, annihilating the past and present, this is the place in which occurs the transmission of the Treasury of the Eye of the True Dharma.

*Quotes from Dogen, taken Moon in a Dewdrop, edited by Kazuaki Tanahashi