The infamous comedy bus tour that brought Asheville characters like Sister Bad Habit opened up a bar at 76 Biltmore Ave. on March 17. The Citizen-Times 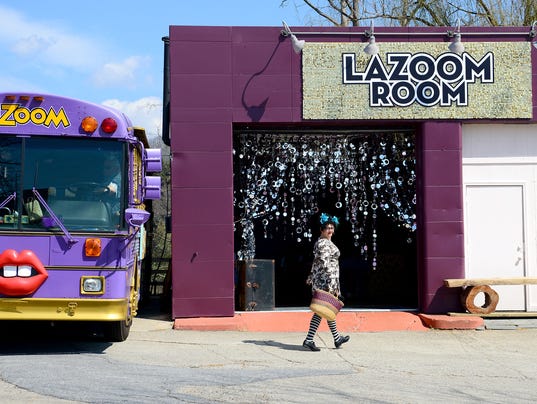 Federica Collina walks into the LaZoom Room on Biltmore Avenue before leading a tour on the big purple bus on Tuesday, March 21, 2017. The pop-up bar is now the loading spot for the popular bus tour. (Photo: Angeli Wright/awright@citizen-times.com)Buy Photo

Whether you’re on the bus, off the bus — or not interested in buses at all — LaZoom Tours has got a new trick up its sleeve, and it’s planted firmly on the ground (with no wheels at all).

The infamous comedy bus tour that brought Asheville characters like Sister Bad Habit opened up a bar at 76 Biltmore Ave. on March 17, celebrating the greens of St. Patrick’s Day with a whole lot of purple and gold.

“It was crazy,” said co-founder Jim Lauzon of the grand opening party last Friday night. “We had a line out the door of 30-40 people most of the night. The only sad part was that (I had) friends that tried to get in and couldn’t —  and they’re waving at me through the window. It was fun to take a nap most of Sunday and just relax after getting something up-and-running so fast.”

In fact, Lauzon and the LaZoom team had just five weeks to open up the new LaZoom Room, which, sadly, is only a temporary venture for the raucous crew of city-cruising comedians. The space will eventually be home to the French Broad Food Co-op’s expansion, and Lauzon opened up the LaZoom Room to test the waters for possible future ideas for his company.

“We knew that we had to race to get it open, because we had a nine-month window before the co-op is hoping to do their expansion,” Lauzon explained. “As soon as we started to pay rent, we said, ‘Let’s get this going.’ … Sometimes you can go crazy with the details (before opening), and it’s really fun. But to have a really short window like this was like, ‘OK. We’re going to start having fun now.'”

Kyle Samples bags up a beer for a customer before she boards a comedy bus tour at the LaZoom Room on Tuesday, March 21, 2017. The pop-up sells beer to drink at the bar or packaged to take on the big purple bus.  (Photo: Angeli Wright/awright@citizen-times.com)

The 80-person capacity bar serves as the new pick-up and drop-off point for LaZoom’s bus tours, and it gives guests a chance to relax and warm up or wind down before and after making the rounds around Asheville. It’s not only for tour-goers, though. The bar serves local beer and wine, and Lauzon hopes it’ll attract lots of locals hoping to have a post-work social hour.

“Now that the weather is nice, we’ll have the garage doors open, inviting people to come in after work for a glass of wine,” the co-owner continued. “I really just imagine it’ll be a great hangout spot for people that work downtown — or who are just hanging out downtown — to come in and relax and enjoy music and quirk.”

Just minutes after chatting with Lauzon on the phone, the always-upbeat business owner texted a new announcement: “This just in!” he began. “DJ Whitney (Shroyer), formerly the DJ of the Admiral’s Saturday night dance parties, will be DJing the LaZoom Room every Friday night, starting (March 24).”

Shroyer, who goes by DJ Dr. Filth when spinning albums behind a turntable, is the Asheville-famous record-collector behind the now-defunct hit dance parties in West Asheville, where young and old alike danced to a mix of doo-wop, classic rock and soul hits from the ’50s, ’60s and ’70s.

“We did our opening party, and it was such a success (that) we are going to go for it,” Lauzon wrote.

Lauzon has never owned a bar before, but, while living in New Orleans, he and his wife (LaZoom’s other founder) ran and managed bars in another of America’s great drinking capitals.

Prior to opening the LaZoom Room, the popular bus tours were centered around Thirsty Monk beer bar — but the space wasn’t as suited for the theatrics behind the LaZoom Tours.

“We had people hiding behind cars in costume, waiting to be introduced,” Lauzon said of his comic characters. “Now they have a comfortable green room. They have a little more glamour.”

Sherri Kirkpatrick, left, and Rhonda James, both from Ohio, chat before boarding a tour bus at the LaZoom Room on Tuesday, March 21, 2017.  (Photo: Angeli Wright/awright@citizen-times.com)

With a lease that ends on Feb. 1, 2018, locals and visitors will have less than a year to enjoy this bright purple ode to Asheville’s weirdness — but, for right now, that’s OK with Lauzon.

“Some people are asking me if we’re sad knowing that it’s so temporary,” he said. “I’m not sad at all. If anything, it makes it that much more exciting. … It just feels like: OK. We’re going to fly out of this nest and enjoy it while we can. … I can’t believe that we’ve never had a space like this for our bus riders. It’s so great to see them lounging around, enjoying the art and the weirdness of the place — instead of, like, standing on a sidewalk in a weird line.

The LaZoom Room opened on March 17 at 76 Biltmore Ave. and will be open until Feb. 1, 2018. Hours are 2-10 p.m. every day of the week, and the bar is open to tour patrons and passersby alike. For more information, head to lazoomtours.com. 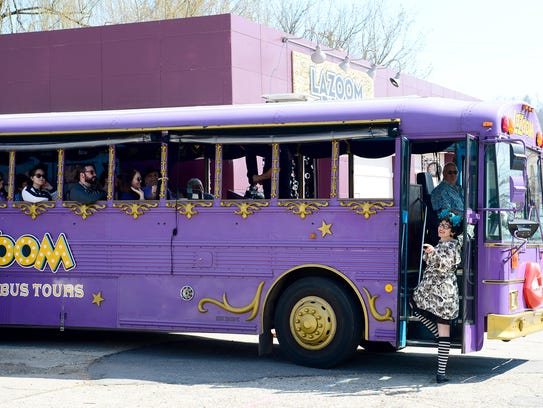 Federica Collina looks back before boarding the big purple bus to lead a LaZoom Tour outside of the new LaZoom Room on Tuesday, March 21, 2017. The pop-up bar is now the loading spot for the popular bus tour.  (Photo: Angeli Wright/awright@citizen-times.com)