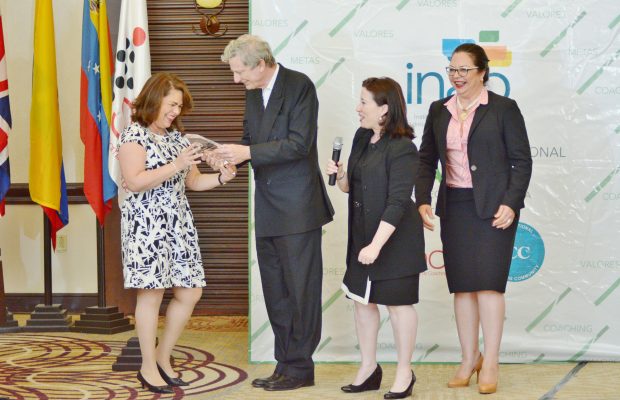 The National Institute of Public Administration (INAP), receives recognition from the International Coaching Community (ICC), the hand of the ICC Master Trainer, and NLP, Joseph o’connor, in his visit to the country.

The recognition is due to the vision that has had the INAP, incorporate the first Certification of Coaching, directed exclusively to Public Servants within their academic offerings corresponding to the year 2017.

This initiative, specialized has been developed in coordination with the Dominican Society of Coaching and with the participation of international coaches from the ICC, the likes of Joyce Veloso of chilean nationality, who has an extensive track record.

Joseph o’connor, in addition to International consultant and Executive Coach and is the author of more than a dozen books on coaching and Neuro linguistic Programming (NLP) is a Co-founder of the ICC and President of the Lambent do Brasil. He has worked as a trainer, consultant and coach in numerous companies and governmental entities at the international level. Is the creator of the systems Audit, a consultative process to trace the system of the business to easily understand how to change it in the best way.

Dr. Celenia Vidal, expressed appreciation for this recognition and dedicated the same to the participants of the certification of coaching and to the institutions where they come from, who have relied on the INAP to work on the purpose and primary vision of our institution, to achieve the integral transformation of the public servers, to be able to have a better public administration with a higher quality in the services that we offer.

He stressed the importance of the visit of o’connor, who has as one of its greatest specialities, to help high-level executives with the vision, mission and values, specializing in leadership coaching and the systemic understanding of the business.