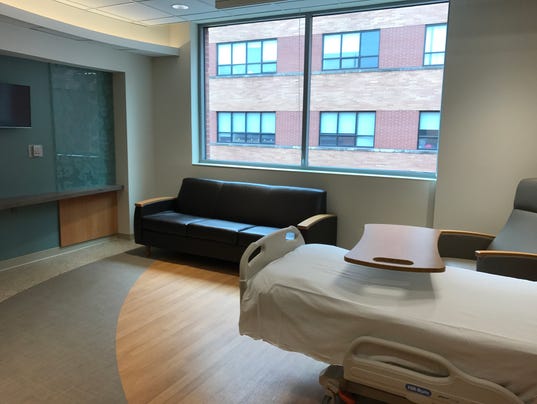 Calming elements for the typically stressful environment of an intensive care unit and an emphasis on personalized patient care are being touted as parts of an ambitious expansion at Clara Maass Medical Center in Belleville.

A new 27,000-square-foot ICU at Clara Maass Medical Center in Belleville is expected to be operating in early April, hospital officials said Monday as they unveiled a four-story, 87,000-square-foot building housing the 32-bed ICU, patient registration center and retail pharmacy.

“Whether the patients would stay here or need service that would require going to one of our affiliate hospitals, such as a trauma center or burn unit, we can take care of anyone who would come through the doors,” said Clyne, referring to the burn unit at St. Barnabas Medical Center in Livingston, and the trauma center at Jersey City Medical Center.

In town:Photos: Getting healthy at Belleville High School

Speaking to the crowd, she referenced partnerships with the local community. Those have included their participation in a Saturday, March 25, health fair at Belleville High School.

“Nothing defines giving back to the community like taking care of the sick and the elderly, and they do an exceptional job here,” said Deputy Mayor Vincent A. Cozzarelli.

“We’re partners with them. We work with them hand-and-foot. Whatever they need we help them. When there are emergencies they help us,” Cozzarelli said.

While the new ICU is not expected to significantly change the flow of ambulances, local first responders were pleased to hear that the hospital in Belleville is expanding its capacity to care for the critically ill. 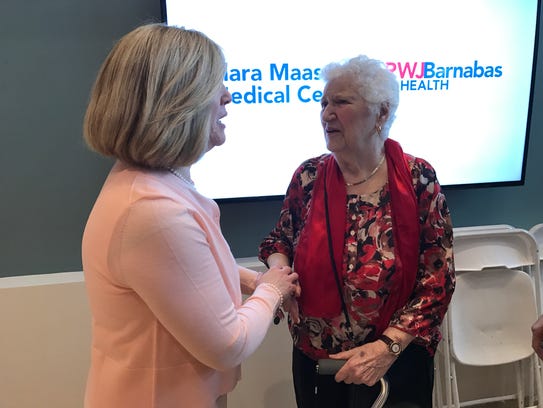 Belleville Fire Capt. Scott Wentworth said his squad takes around 80 percent of its patients to the hospital in the township.

The rest of the patients, Wentworth said, are split between HackensackUMC Mountainside in Glen Ridge and University Hospital in Newark, which can handle more severe trauma cases.

“We have Clara Maass as an in-town hospital, so it’s convenient for us,” he said.

North Arlington Volunteer Emergency Squad Capt. Chris Imbrenda, during a conversation at the opening, said Clara Maass is a seven-minute ride from the Bergen County municipality, which shares a border with Belleville.

About 70 percent of his patients are transported to the hospital in Belleville, Imbrenda said, so he was pleased to see the expansion.

Lauren Kean, an ICU nurse at Clara Maass Medical Center in Belleville, shows how she can monitor multiple patients from a nursing station at the hospital’s new ICU Monday, March 27, 2017. (Photo: Matt Kadosh/NorthJersey.com)

The new buildings’ construction, he said, follows the closures of Saint James Hospital and Columbus Hospitals in Newark in 2008 and West Hudson Hospital in Kearny in 2003.

“Most of that overflow has come to Clara Maass so it’s nice to see that they’re expanding here,” Imbrenda said.

With private patient rooms that average 350 square feet, and include couches with pull-out beds for families, the ICU stands out.

“The emphasis is on personalized care,” said Roozbeh Rajaei, an assistant nurse manager at the ICU.

Lauren Kean, an ICU nurse giving tours of the new facility on Monday pointed to a feature of the floor called the “Tranquility Room,” which will have calming elements for families and staff.

Kean said other hospitals with such rooms have had waterfalls, soothing music and lavender scents.

“This is if you need to get away and relax for a minute,” Kean said. “It can be for a family member or for a nurse too. Sometimes nurses have very stressful days. Sometimes you need a minute to just sit and calm down before you take on more in your shift.”