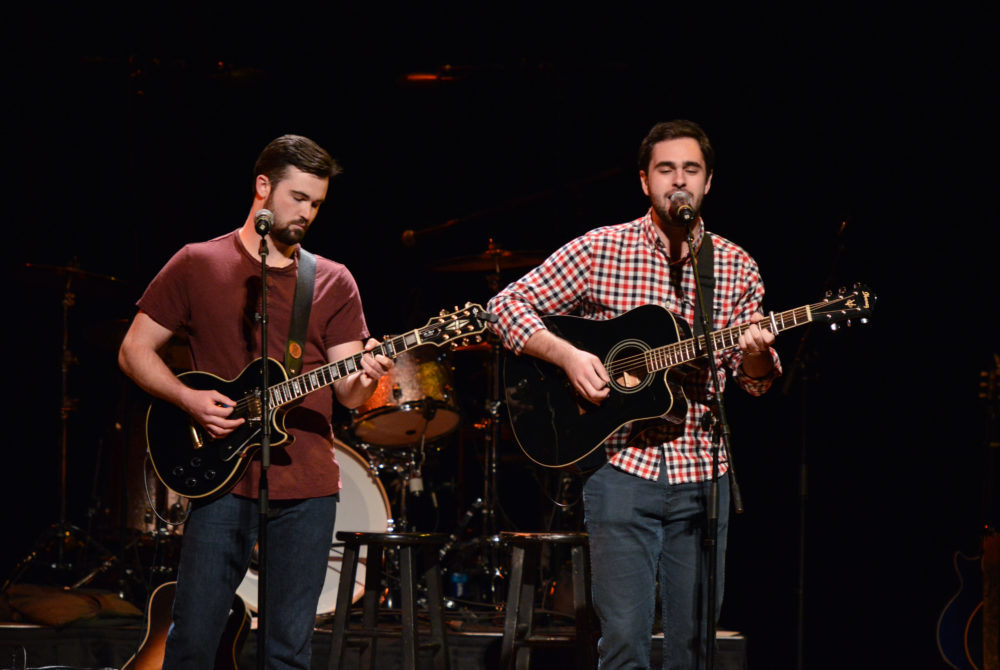 A senior and a recent graduate played a stripped down, laid back set with just two guitars and their vocal cords when they opened for country newcomer Brett Young at Lisner Auditorium Wednesday night.

Dan Fanelli, who graduated in December with a bachelor’s degree in political science, and Sam Evans, a senior majoring in organizational sciences, covered songs by Thomas Rhett and Keith Urban during their opening set, but added a classic rock twist by mixing in electric guitar.

For their final song of the night leading up to Brett Young’s performance, the duo performed a medley of “Free” by the Zac Brown Band and “Into the Mystic” by Van Morrison. Fanelli told the audience when his dad first found out about his upcoming performance, he said you can’t perform country without a hat so before the duo strung the first chords on their guitars, they each slipped on GW baseball caps.

Fanelli first heard about the show when an email was sent out from Lisner Auditorium to find an opening act with a country sound to help draw students to the concert. Fanelli said he typically sings with the GW Troubadours and Evans plays in GW’s Jazz Orchestra, but outside those groups, the two get together to “jam,” which is why playing as an opening act at Lisner Auditorium was a surprise to them.

Fanelli said both musicians enjoy playing music as a break from their busy schedules filled with work, classes and internships. Music has always been a way for them to relax and has been an outlet to “reel [them] back in.”

“There’s not a care in the world when you’re playing music,” Fanelli said. “Nothing matters but the next chord, the next note, the next harmony.”

Both musicians have specialties outside of the country music genre but said they were impressed by Young’s modern country style, especially in songs like “Sleep Without You” and “You Ain’t Here to Kiss Me.” Young released his first LP last February and will open for Luke Bryan on his tour this summer.

Fanelli said he owes his interest in country to his father, who exposed him to classic country musicians like Alan Jackson, Brooks & Dunn and Merle Haggard. He cited the Zac Brown Band as an influence, but like any true musician, he said he listens to all music genres.

“I always say anything that sounds good, I listen to,” Fanelli said. “It can be anything from opera to country.”

Although they don’t write their own music, Evans said he often uses his jazz background to personalize the covers they perform.

“As I’ve been playing in jazz bands, most of my creativity comes out in my improvisations, whereas some musicians will go out and write songs and that’s how they have their sort of creative outlet, for me, I focus on listening to the band and making things up on the spot,” Evans said.

This article appeared in the March 9, 2017 issue of the Hatchet.