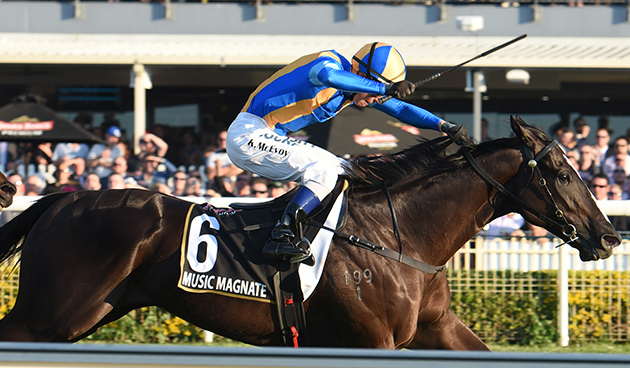 Music Magnate is on track to defend his Doomben 10,000 crown on May 13, after the Written Tycoon gelding’s Group 2 Victory Stakes win at Eagle Farm on Saturday.

The Bjorn Baker-trained five-year-old was coming off a freshen-up from a luckless Sydney carnival, when well-beaten on Heavy 10 tracks in each of the G1 Canterbury Stakes and The Galaxy.

But six weeks between runs proved the tonic for Music Magnate, who beat the G1-performed Hopfgarten by 1.3 lengths in the 1200m sprint – with a couple of G1 winners Miss Cover Girl and Takedown further back.

Baker said firmer conditions than what Music Magnate has faced of late – Saturday’s win came on a Soft 7 – would aid his bid for back-to-back 10,000s.

«I think Doomben should suit him a little bit better. I do think he’s a better horse the firmer the going, so hopefully we can have a dry couple of weeks at Doomben,» Baker told RSN 927’s Correct Weight.

Music Magnate is a $9 chance with CrownBet to defend his crown.

There is only two weeks now into the 10,000, which has been shifted a fortnight earlier on the calendar compared to its place in 2016, but Baker said it has always been the target race.

«He [jockey Jeff Lloyd] said afterwards that it [the Victory Stakes run] will probably take a little bit out of him,» Baker added.

«It [the track] didn’t play quick. I guess that’s something for me to be mindful of.

«He licked his bowl clean [on Sunday]; he looks great at the moment – a little bit of a freshen-up after a couple of dud runs on Heavy tracks in Sydney did him the world of good.»

Baker had a fruitful May in the sunshine state last year, with also now-retired colt Winning Rupert emerging with victory in the Group 2 Champagne Classic at Doomben.

And it could be his month again in 2016, as he will have Group 1 runners on consecutive Saturdays in the coming weeks, with Egyptian Symbol ($15 with CrownBet) running in this week’s Robert Sangster Stakes in Adelaide.

The Group 3-winning mare will be having her first start in a Group 1 on Saturday, and Baker said he is hoping she doesn’t find herself in front as she has done of late, to her detriment.

«I don’t know how it’s come about with her [that in] a couple of her runs – particularly Magic Millions, and when she raced on Melbourne Cup Day at Flemington – she was on the speed,» Baker said.

«I think she’s definitely a better horse if she can get a little bit of cover, she tends to relax a lot better. She doesn’t have to get right back, but if she can settle off the speed, I think she’s got a really good turn of foot. If she leads, it seems to be nullified.

«I couldn’t be happier with her going into the Sangster, it looks to be a good race, but she’s fresh and well, she’s one horse being peaked for it, while for some of the others, it’s an afterthought so I’m hoping that can play into our hands.»