Running through the backstage door with backpack in hand, sophomore Theater and Advertising major Lauren Jennerjohn races from a four-hour class on the opposite side of campus to Smothers Theatre, just in time for warmups and mic check.

The call-board hallway bustles with noise as actors and crew members shuffle between the stage and the dressing room, singing the songs stuck in their heads, re-running almost-perfect dance steps and doing last-minute makeup touch-ups.

“Every morning I look forward to 6 o’clock. Rehearsals are hands down my favorite part of the day,” Jennerjohn said.

While finishing up final bits of homework, the five-minute call is made and Jennerjohn puts her textbook away to begin the pre-show ritual with her cast mates, gathering in a huge circle while clapping, singing and laughing together, preparing to create their art.

Amid a 15-week college semester, the student performers have around 10 weeks of preparation and anticipation for the moment the curtain will rise each night.

Some things just can’t be taught inside the classroom, and some experiences just can’t be learned from a textbook. Experts say college students involved in time-consuming extracurricular activities, like the fine arts, experience significantly more well-rounded learning, personal growth and maturation than what classes alone could provide. While these students do face new and unique challenges, they often reap the rewards of those successes to a greater degree, according to the Americans for the Arts organization.

As a double major, Jennerjohn described the difference between her Fine Arts classes and her Communication classes.

“The whole environment is different. In the CCB, everyone is standoffish and to themselves. Meanwhile in theater, everyone wants to get to know each other and learn from each other. In my COM class, I don’t even know everyone’s names,” Jennerjohn said.

A 2016 study from the Journal of Experimental Psychology: Human Perception and Performance experimented with dancers and non-dancers while testing their emotion in response to other human activity, finding that the dancers were more emotionally sensitive than the others, concluding that empathy training was a primarily influential factor. 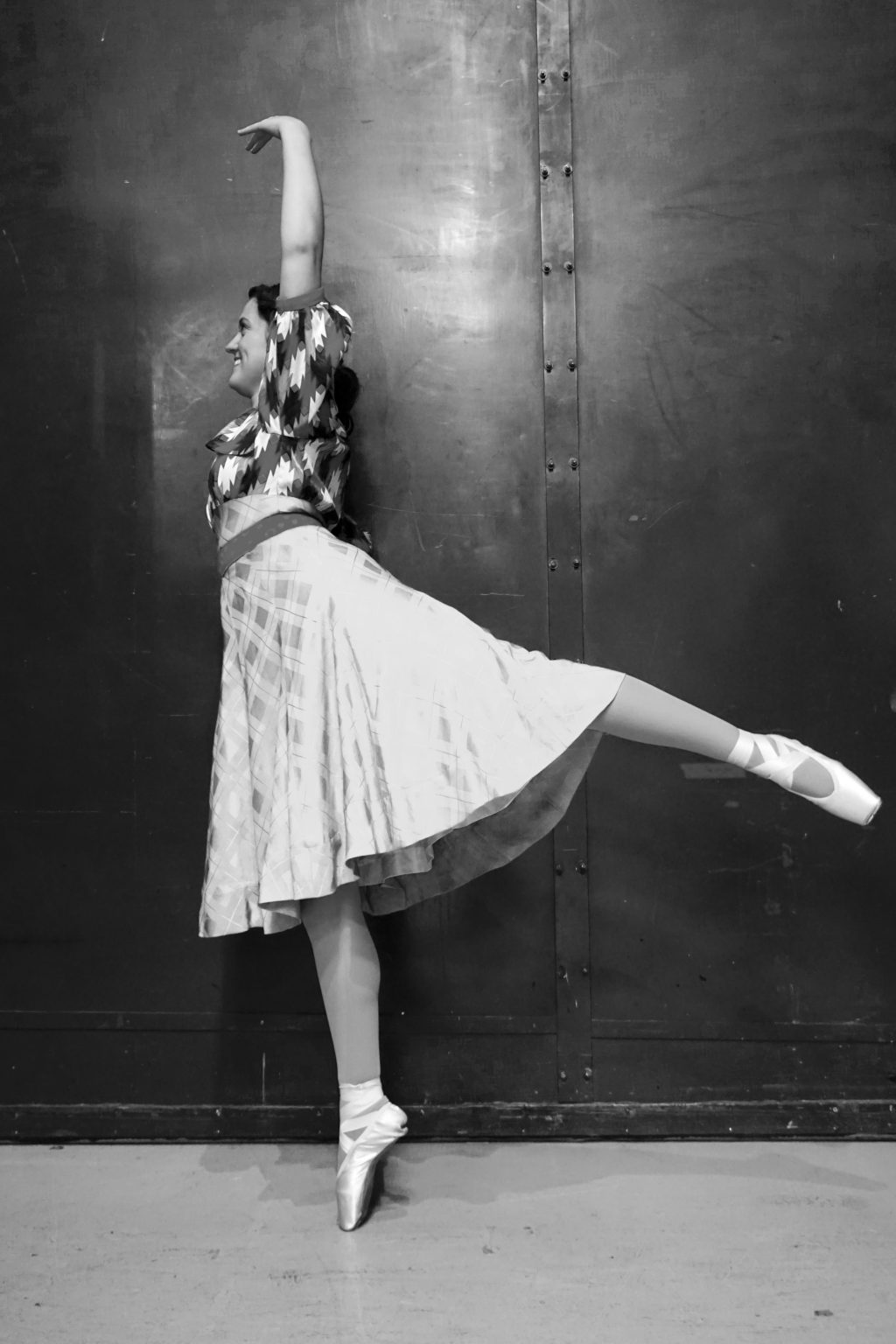 At Pepperdine, the results of the study also apply.

Professional choreographer and professor, Kelly Todd, described how any kind of dance is a great outlet for artistic expression for college students because it works the brain in new ways.

“Dance is art, and your body is your instrument, but it doesn’t stop there. Your body and your mind are connected so you have to connect them in a meaningful way,” Todd said.

Senior Theater major Jalon Matthews, no stranger to performing in Pepperdine’s theater productions, commented on his experience as he ran lines with his female lead counterpart.

“Theater is all about representing real life connections. The more we work as a team, the better we are as actors and as people,” he said.

The Center for the Neurobiology of Learning and Memory at the University of California completed new research that revealed the influence of music on the brain. Brain scans taken during musical performances showed significant activity throughout the entire cerebral cortex while the musicians played, supporting their conclusion that learning music will improve skills in math and reading as well as creativity, social development, personality adjustment and self-worth.

Natalie Leonard, a junior Music major, choir member and frequent cast member for Pepperdine’s opera productions, said she finds that studying music has helped her understand the world in a new way.

“For example, we learn and sing foreign pieces in different languages a lot. I for sure have a greater appreciation for different cultures, more than other students my age,” Leonard said.

The Arts department at Pepperdine also promotes academic growth in their programs, according to their website.

Nearly 75 percent of students who participate in the annual arts productions as an extracurricular activity are Theater or Music majors who are on scholarship, according to the scholarship section of the Pepperdine Theatre web page. This requires a minimum GPA of 2.5, which encourages them to remain serious about academics in addition to their artistic commitments, according to the financial aid section of the Pepperdine website.

It is not mandatory to be an Arts major to participate in a production as a Pepperdine extracurricular, according to the student opportunities page of the Pepperdine website.

Freshman Integrated Marketing Communication major Annika Lile said she is glad to be learning so much from the extensive time spent being a part of the theater program while participating in the musical “Crazy For You.”

“As a non-theater major, being in the musical offers me a chance to be expressive and work on my talents in addition to my coursework. The biggest thing is my confidence. Here I can challenge myself and learn more about who I am and how to relate with others,” Lile said.

However, being involved in the arts is particularly time consuming at Pepperdine, according to a research survey recently conducted by junior Public Relations major Elizabeth Ford.

Results from the study showed that with more than 100 students surveyed, 71 percent reported spending anywhere from 15 to more than 30 hours a week doing theater-related activities.

Data from the same study shows that 60 percent of theater students only have zero to one other extracurricular because of the intense time commitment of the program.

Freshman Nate Bartoshuk said he loves being involved in his first Pepperdine production, but feels that the heavy time commitment means he has to miss out on other things.

“There are a lot more things that I would like to do here, specifically in the realm of spiritual life. I have to miss my freshman house Bible study and house group because I’ve never been able to go with having rehearsals every night,” Bartoshuk said. 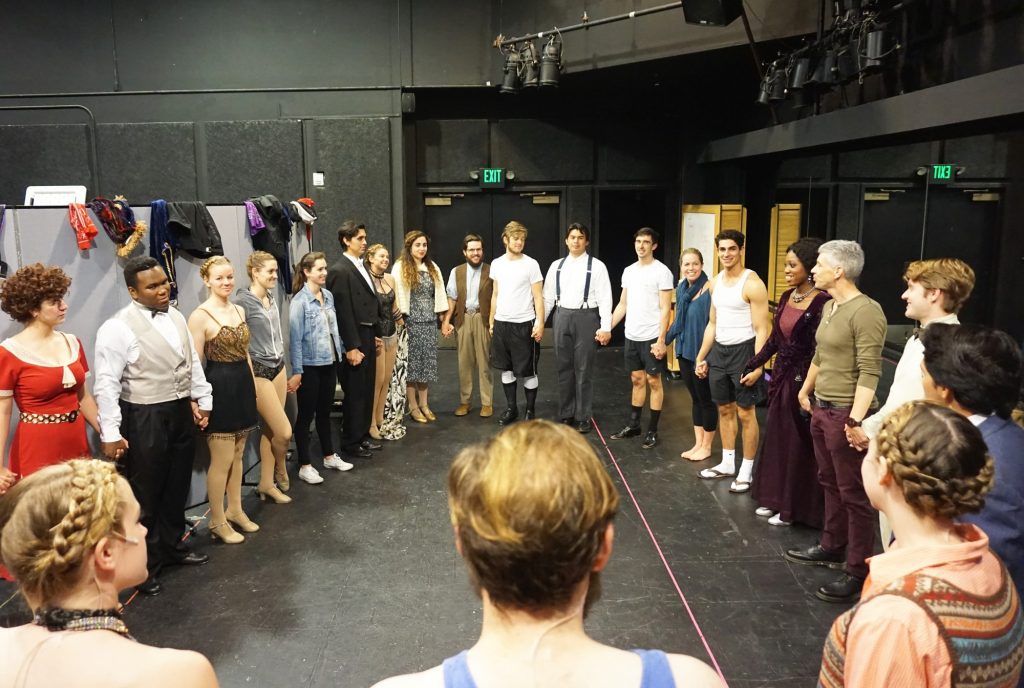 The cast of «Crazy For You» circle up before the performance. Photo credit: Gabby Gonta

Although Bartoshuk said he has little time for more than his one extracurricular, he still believes he is learning significantly more than if he were not involved.

“I do think it’s worth it because I know we’re going to put on a fantastic production with all the work we’re putting in, and I’m learning a lot from being a part of such a high-quality show,” Bartoshuk said.

Junior Theater and Media Production major Mallory Erwin, who was also a cast member of “Crazy For You,” said she was not as involved in the theater department during her first two years, but still made the arts a priority in other ways.

“I was preoccupied [with] having ‘the Pepperdine experience’ by doing Songfest and going abroad to London, which was important in forming who I am now as a junior looking toward a future career in the arts,” Erwin said.

Senior Alex Garrett has been a part of multiple theater productions during her college career and recently played the lead in Pepperdine’s winter play, “Eurydice.”

“Performing has taught me more about stress management, empathy, humility, rejection and success than I probably ever bargained for at first,” Garrett said.

Even after a long, 12-hour day of classes, homework and rehearsals, Jennerjohn lit up at the chance to talk about her love for the arts and her strong suggestion for everyone to be a part of it in some way.

“The things I learn here doing theater, music and dance is something I fall in love with again every day,” Jennerjohn said.