Knoxville Opera Conductor Brian Salesky talks about the 2017 Rossini Festival and what it does for Knoxville. Andrew Capps 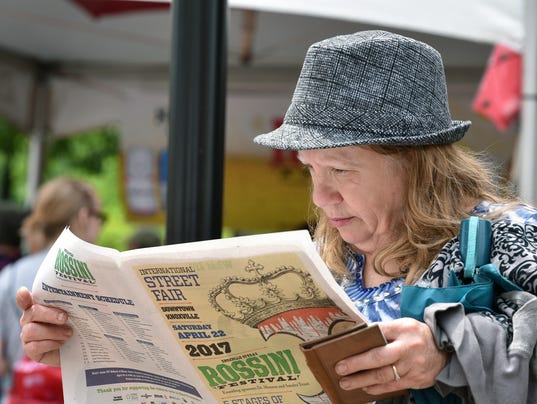 The 16th annual Rossini Festival drew thousands of people to downtown Knoxville on Saturday for an all-day assembly of nearly 1,000 musicians from around the region.

The crowd held out against intermittent rain throughout the morning and afternoon, but many left Saturday evening after severe weather warnings and reports of hail in the Knoxville area.

Michael Torano, director of marketing and public relations for the Knoxville Opera, confirmed that the festival was cancelled around 6:30 p.m.. According to Torano, several exhibitor tents were damaged by the weather. He added that, while officials from the opera were disappointed to end the festival early, they were pleased with the crowds they saw earlier in the day.

“Unfortunately, we did shut down around 6:30. We had enough wind to destroy ten or twelve of our exhibitors on the North end of Gay Street,” Torano said. “We had wonderful crowd for a few hours, but when the weather came through everybody disappeared very quickly. But we had a great crowd while the weather was good.”

For Knoxville Opera Conductor and Executive Director Brian Salesky, the festival was an opportunity for visitors to hear music they are not usually exposed to and to see groups that they would not normally find on a downtown Knoxville stage.

“We hope that everyone here enjoys themselves and gets a chance to experience a kind of smorgasbord of culture that they might not otherwise have anywhere else for free,” Salesky said.

The festival, which was organized and presented by the Knoxville Opera, featured over 80 different performances from groups that spanned the realm of music genres. Performing artists included folk groups, jazz ensembles, college concert choirs and steel drum bands. The bands were joined by over 175 festival vendors, that gathered along Gay Street, Krutch Park and Market Square on Saturday as part of the festival’s exploration of unfamiliar tastes and sounds.

Among the over 80 different groups performing across five separate stages downtown were two groups led by local musician and band leader Tom Lundberg. Lundberg, who directs the Knoxville Jazz Youth Orchestra, the educational arm of the Knoxville Jazz Orchestra, and the Pellissippi State Community College Brass Ensemble, has been bringing groups to the Rossini festival for nearly ten years. For him, the festival is an opportunity to expose his students to larger crowds.

“I find that, especially when the weather is good, both of the groups attract a large number of walk-up audience members,” Lundberg said. “People who stroll by or hear the music carrying out across the street and are drawn in and invariable stay until the end of the set. Half the time we might start with 100 or so people seated and finish with as many as 300 or 400.”

Amy Edge, who serves as the Rossini Festival Committee Chair for the Knoxville Opera, estimated that nearly 50,000 people attended the event on Saturday, which she said was close to half of the attendance that the festival would expect to see with better weather. Still, she said, people would enjoy themselves and the festival come rain or shine.

“We typically get about 100,000, but with the weather today we’ll get probably about half of that,” Edge said. “We want people to just come out and enjoy it. Everyone is so busy these days that’s it’s nice to have a day when you can just come and relax, listen to music, appreciate each others talents and have a good time.”