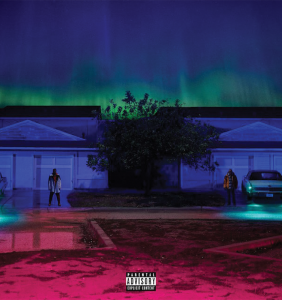 GOOD MUSIC
Growing as a musical artist, Detroit rapper Big Sean shows a strong desire to inspire personal growth in his listeners through his fourth studio album “I Decided.”

Detroit rapper Big Sean has consistently produced music that reflects on both the demanding nature of the rap industry and his own hard work and struggle toward success. In this sense, “I Decided.,” his fourth studio album, is reminiscent of his past work. However, his latest album is unique in that the songs and interludes connect to form an overarching narrative, in which Big Sean is given another chance at life.
To understand the concept of the album, start at the album cover. The cover art for “I Decided.” shows two men standing in front of their driveways, parallel to one another. Big Sean explained on “The Tonight Show with Jimmy Fallon” that the men represent his present-day self and an older version of him, which is fitting, given that the album opens with a monologue by an elderly man. The man laments how he has remained in the same job all of his life and has a poor relationship with his family. He likely represents the older, alternate version of Big Sean — a Big Sean who has not lived life to its fullest.

The introduction transitions into “Light,” an optimistic song that begins with ringing bells and relaxed electric piano chords. Big Sean seems to suggest that his alternate self has been reborn and is now inspired to live life differently. He raps, “Spent my whole life trying to find the light that’s at the end of the tunnel / I should have realized it was inside,” suggesting that he and others should live in the moment to bring out their true potentials.

The album is filled with messages about Big Sean trying to live life to his best ability. On “Voices In My Head / Stick To The Plan,” Big Sean raps personalized pieces of advice to himself, saying, “Stay focused / Pay attention who you getting close with.”

He also rethinks what he wants in romantic relationships. On “Halfway Off the Balcony,” he reflects on his past romantic endeavors, rapping, “I realized when it comes to girls that chemistry means way more than anatomy.” Big Sean’s motivational messages can seem somewhat obvious at times, but he speaks with intense conviction. Even skeptical listeners will likely feel inspired.

Although Big Sean wants to motivate others to live to their fullest potentials, he admits he has his own flaws and is working toward self-improvement. “Halfway Off the Balcony” ends in a scene in which Big Sean ignores a phone call from his mother, suggesting that he is neglecting his relationships with loved ones. This critical self-reflection helps Big Sean provide listeners with advice without seeming too self-righteous.

On “Sunday Morning Jetpack,” Big Sean takes time to reminisce about childhood memories with his family, using them to lift his spirits up — like a jetpack. At the end of the song, Big Sean finally answers his mother’s telephone call, leading to the next track, “Inspire Me,” an ode to his mother.

Like Big Sean’s past albums, “I Decided.” contains songs designed to be stand-alone hits, but most still relate to the album’s larger thematic messages. “Bounce Back” is a fun, catchy song that is likely to appeal to a wide range of listeners. Big Sean’s message about bouncing back from his failures is key to his life philosophy.

“Sacrifices” also has qualities that make it destined for popularity, such as a beat from producer Metro Boomin that is sure to stick in listeners’ heads as well as guest verses from members of Atlanta rap group Migos. However, the track also connects to the album’s central message of working hard to live one’s best life, as Big Sean and Migos describe the sacrifices they have had to make to become successful in the music industry.

The final song, “Bigger Than Me,” is a standout of the album. Big Sean raps over a captivating looped vocal sample and explains his realization that his love for his family and his hometown, Detroit, is a more powerful motivator for him than money.

The album concludes with a conversation between Big Sean and his mother that summarizes his main message. They say how they love each other, and Big Sean’s mother admits that she lives vicariously through him. Sean says that he feels like he is living life a second time, only this time, he is correcting his mistakes and fulfilling his dreams.

Big Sean certainly wants to inspire personal growth in his listeners, and his latest album shows that he is growing as a musical artist. “I Decided.” has stronger lyrics, more memorable production, and is more cohesive than his past efforts.  It presents two alternate ways to live life: passively, or in the moment and to the fullest.  It is up to each person to make the decision, and the album makes it clear to listeners what Big Sean has decided on for himself.

Have a reaction to this article? Write a letter to the editor.